Sun Tzu
Sun is his family name, and Tzu is an honorific in classic Chinese, roughly equivalent to Sir, or the Learned Gentleman. His given name is Wu (武). His style name is Changqing (長卿). Sun Tzu is traditionally believed to be the author of The Art of War, sometimes called the Sun Tzu, an influential ancient Chinese book on military strategy considered to be a prime example of Taoist strategy. Sun has had a significant impact on Chinese and Asian history and culture, both as an author of the Art of War and as a legendary figure. During the 19th and 20th centuries, Sun’s The Art of War grew in popularity and saw practical use in Western society, and his work has continued to influence both Asian and Western culture and politics.

Historians have questioned whether or not Sun was an authentic historical figure. Traditional accounts place him in the Spring and Autumn Period of China (722–481 BCE) as a heroic general of the King of Wu who lived c. 544—496 BCE. Scholars accepting his historicity place his supposed writing The Art of War in the Warring States Period (476–221 BCE), based on the descriptions of warfare in the text. Traditional accounts state that his descendant, Sun Bin, also wrote a master treatise on military tactics. 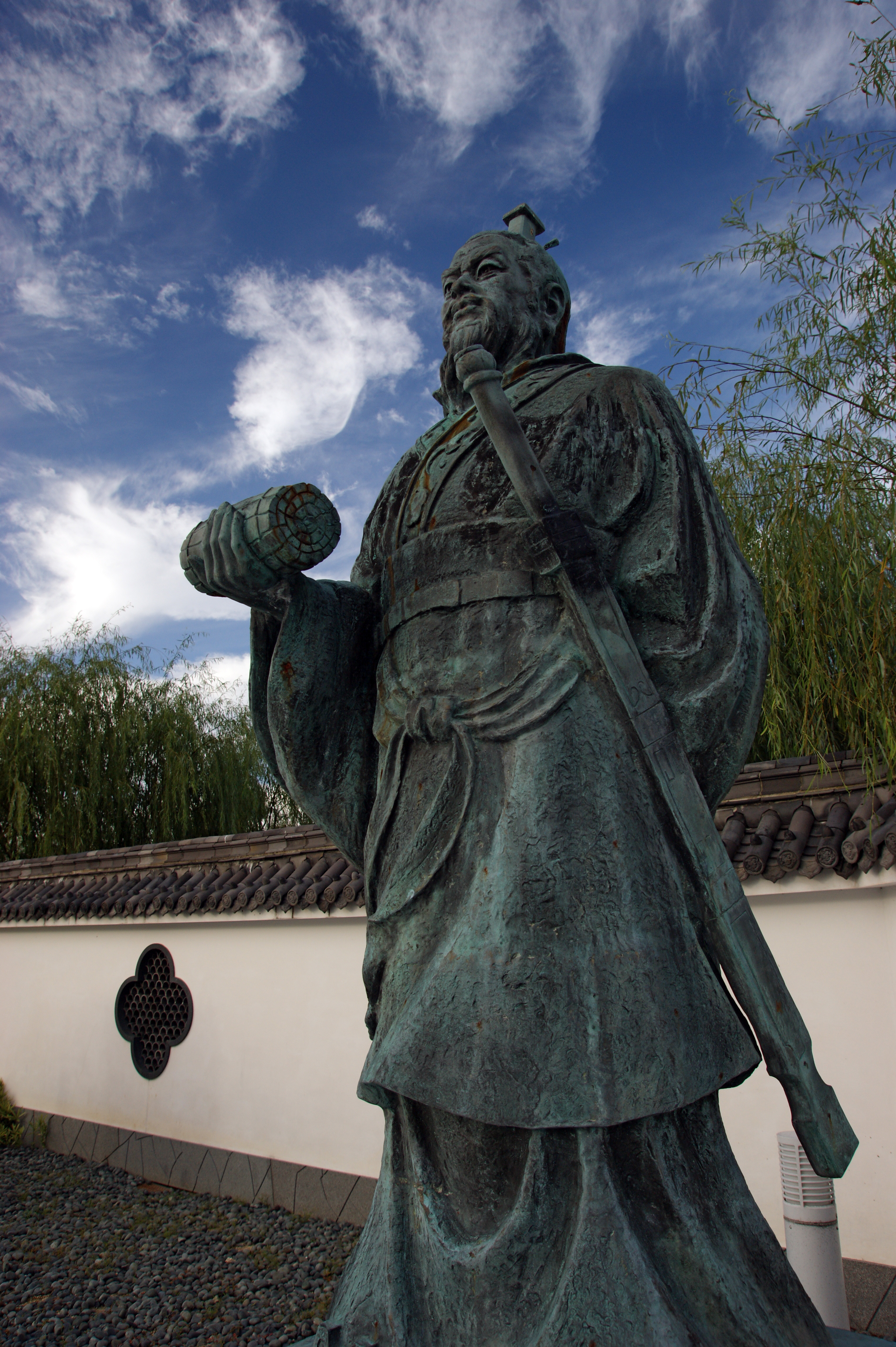 Life
Historians have questioned whether or not Sun was a real historical figure. According to traditional sources, such as the 2nd century BCE biography written by Sima Qian, Sun was born in Qi (now Shandong Province) during the Spring and Autumn Period of China (722–481 BCE). His real family name is Tian, but the last name of Sun was given by King of Qi State to his family when his grandfather, a general for Qi, won a big battle. When Sun Tzu was young, his family was having trouble with some royal families, and he moved to Wu state and became a heroic general for the king of Wu, Helü. His victories then inspired him to write The Art of War. Historians place the writing of The Art of War in the Warring States Period (476–221 BCE), based on its description of warfare. The period was a time of constant war among seven nations (Zhao, Qi, Qin, Chu, Han, Wei and Yan) seeking to control all of China.

The king of Wu tested Sun’s skills by commanding him to train a harem of 360 concubines into soldiers. Sun divided them into two companies, appointing the two concubines most favored by the king as the company commanders. When Sun first ordered the concubines to face right, they giggled. In response, Sun said that the general, in this case himself, was responsible for ensuring that soldiers understood the commands given to them. Then, he reiterated the command, and again the concubines giggled. Sun then ordered the execution of the king’s two favored concubines, to the king’s protests. He explained that if the general’s soldiers understood their commands but did not obey, it was the fault of the officers. Sun also said that once a general was appointed, it was their duty to carry out their mission, even if the king protested. After both concubines were killed, new officers were chosen to replace them. Afterward, both companies performed their maneuvers flawlessly. Sima’s biography claims that Sun later proved on the battlefield that his theories were effective, that he had a successful military career, and that he wrote The Art of War based on his tested expertise. His descendant, Sun Bin, also became a famous scholar of the military arts.

The Art of War
A bamboo version of The Art of WarThe Art of War is attributed to Sun, and it was originally called the Sun Tzu Bing Fa (Pinyin: Sunzi Bingfa), or simply the Sun Tzu. It presents a philosophy of war for managing conflicts and winning battles. Contrary to popular belief, it contains not only the writings of the original author, but also commentary and clarifications from later military philosophers, such as Li Quan and Du Mu. It is accepted as a masterpiece on strategy and often referenced by generals and theorists throughout history. Of the texts written before the unification of China in the 2nd century BCE, six major works survived, including The Art of War. During the Song Dynasty in the early 1st millenium CE, the six works were combined with a Tang Dynasty text into a collection called the Seven Military Classics. As a central part of that compilation, The Art of War formed the foundations of orthodox military theory in China. Illustrating this point, the book was required reading to pass the tests needed for imperial appointment to military positions.

In the book, Sun uses language that may be unusual in a Western text on warfare and strategy. For example, the 11th chapter states that a leader must be „serene and inscrutable“ and capable of comprehending „unfathomable plans“. The text contains similar remarks that have confused Western readers. The meaning of such statements are clearer when interpreted in the context of Taoist thought and practice. Sun viewed the ideal general as an enlightened Taoist master, which has led to The Art of War being considered a prime example of Taoist strategy. The Art of War is distinguished from similar Western works, such as Prussian general Carl von Clausewitz’s On War, by this spiritual dimension. Awareness of the Taoist viewpoint in The Art of War is essential to understanding its intended meaning. The book is not only popular among military theorists, but it has also become increasingly popular among political leaders and those in business management. Despite its title, The Art of War addresses strategy in a broad fashion, touching upon public administration and planning. The text outlines theories of battle but also advocates diplomacy and cultivating relationships with other nations as essential to the health of a state.

In the early 1970s, scholars uncovered a collection of ancient texts written on unusually well-preserved bamboo slips. Among them were The Art of War and Sun Bin’s Military Methods. Although Han Dynasty bibliographies noted the latter publication as extant and written by a descendant of Sun, it had since been lost. The finding of Sun Bin’s work was therefore considered to be extremely important, because of Sun Bin’s relationship to Sun, and the work’s illustration of military thought in late Chinese antiquity. The discovery as a whole expanded the total known Chinese military works by hundreds. However, Sun Bin’s treatise is the only known additional text surviving from the ancient period or bearing a close association with Sun Tzu.

Historicity
Scholars have expressed doubt in Sun’s historicity and the traditional dating of The Art of War. The skepticism is fueled by factors that include historical inaccuracies and anachronisms in the text, as well as the unlikelihood of the execution of the king’s favorite concubines. Increasing skepticism, which sometimes cause scholars to completely deny the existence of a historical figure named Sun Wu (Sun Tzu), has lead to acrimonious debate between skeptics and traditionalists, especially in China. Attribution of The Art of War’s authorship varies among scholars, and have included people and movements including Sun; Chu scholar Wu Zixu; an unknown author; a school of thought in Qi or Wu; and Sun Bin.

Traditionalists attribute the authorship of The Art of War to the historical figure Sun Wu, who is chronicled in the Records of the Grand Historian and the Spring and Autumn Annals. He was reputedly active in the early 6th century BCE, beginning c. 512 BCE. The appearance of features from The Art of War in other historical texts is considered to be proof of his historicity and authorship. Certain strategic concepts, such as terrain classification, are attributed to Sun Tzu. Their use in other works, such as by the compilers of The Methods of the Sima, is considered proof of Sun Tzu’s historical priority.

Scholars that identify issues with the traditionalist view point to anachronisms in The Art of War that include terms, technology, philosophical ideas, events, and military techniques. There is a disparity between the large scale wars and sophisticated techniques detailed in the text, and the more primitive small scale battles that predominated the 6th century BCE. There is also a lack of early contemporary evidence supporting the centuries-later accounts of Sun. For example, there is no corroborating support for his role in the wars between Wu and Yue in the Zuo Zhuan, which is considered the authoritative record of the period. Regardless of Sun’s historicity and the actual authorship of The Art of War, the figure of Sun and his traditionally attributed work have been influential.

Legacy
Sun’s The Art of War has influenced many notable figures. Traditional histories recount that the first emperor of a unified China, Qin Shi Huang, considered the book invaluable in ending the Age of Warring States. Japan was introduced to The Art of War c. 760 CE, and the book quickly became popular among Japan’s generals. The publication also significantly influenced the unification of Japan. Mastery of its teachings was considered a mark of respect among the samurai, and its teachings were both exhorted and exemplified by influential samurai such as Oda Nobunaga, Toyotomi Hideyoshi, and Tokugawa Ieyasu. Historians popularly recount how French emperor Napoleon studied Sun’s military writings and used them to successfully wage war against the rest of Europe. The emperor’s disregard for central principles such as attentiveness to temporal conditions is largely credited for his eventual defeat in Russia. Admiral of the Fleet Tōgō Heihachirō, who led Japan’s forces to victory against Russia in the Russo-Japanese War, was a famous disciple of The Art of War’s teachings.

Communist Chinese leader Mao Zedong partially credited his defeat of Chiang Kai-shek and the Kuomintang in 1949 to The Art of War. The work strongly influenced Mao’s writings about guerrilla warfare, which further influenced communist insurgencies around the world. During the Gulf War in the 1990s, General Norman Schwarzkopf, Jr. practiced Sun’s principles of deception, speed, and attacking the enemy’s weakness. Mark McNeilly writes in Sun Tzu and the Art of Modern Warfare that a modern interpretation of Sun and his importance throughout Chinese history is critical in understanding China’s push to becoming a superpower in the 21st century. Modern Chinese scholars explicitly rely on historical strategic lessons and The Art of War in developing their theories, seeing a direct relationship between their modern struggles and those of China in Sun’s time. There is a great perceived value in Sun’s teachings and other traditional Chinese writers, which are used regularly in developing the strategies of the Chinese state and its leaders.