Military tactics, the art of organizing an army, are the techniques for using weapons or military units in combination for engaging and defeating an enemy in battle. Changes in philosophy and technology over time have been reflected in changes to military tactics.

Concept
Before the nineteenth century, many military tactics were confined to battlefield concerns, such as how to best maneuver units during combat in open terrain. In current military thought, tactics are the lowest level of planning, involving small units ranging from a few dozen to a few hundred men. Units are organized into formations, comprising a higher level of planning known as the operational use of forces. The third tier of military planning is strategic, which is concerned with the overall means and plan for achieving a long-term outcome. Operational warfare is thus an intermediate level in which the aim is to convert the strategy (highest level) into tactics (lowest level of planning). 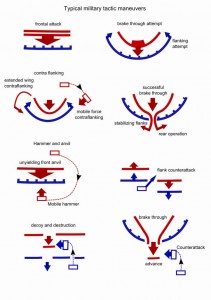 Specialized tactics exist for many situations, ranging from securing a room or individual building, to large-scale operations such as establishing air superiority over a region. Today, military tactics are employed at all levels of command, from individual and group, up to entire armed forces. Indeed, the units used in warfare have always been a reflection of current military tactics, and their size and composition have varied accordingly.

Most people, including some people who are otherwise well-acquainted with military vocabulary, incorrectly use the words „strategy“ and „tactics“ more or less interchangeably. 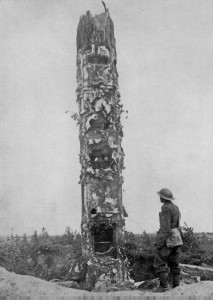 German World War I observation post disguised as a tree.

Military tactics are at once both a science and an art. There are basic principles which — if followed — at least lend competency, ‚battle drills‘ which try to promote automatic responses to given situations, and dozens of guides and instructions that have been written over the centuries. For some, tactics are instinctive. Sometimes they can be taught. At its heart, tactics is a shifting amalgam of psychology, physics, and statistics.

Some practices have not changed since the dawn of warfare: Ambushes, seeking and turning flanks, maintaining reconnaissance, creating and using obstacles and defences, etc. Using ground to best advantage has not changed much either. Heights, rivers, swamps, passes, choke points, and natural cover, can all be used in multiple ways.

What does change constantly is the technological dimension, as well as the sociology of combatants. One might wish to reflect on the differences in the technology and society that produced such different types of soldier or warrior as the Roman Legionary, Mongol Horse Archer, the Chinese Crossbowman, the British Redcoat, or an Air Cavalry trooper. Each, constrained by his weaponry, logistics and his social conditioning, would use a battlefield differently, but would usually seek the same outcomes from their use of tactics.

The US military generally defines three levels of war: 1. the strategic level, which includes both the National level and the Combat Command (theater) level, 2. the operational level, which extends from the level of a joint task force including the combined forces of naval and air power with amphibious and ground operation to the maneuver brigade echelon, and 3. the tactical echelon, that extends from the maneuver brigade to the lowest fighting elements including individual soldiers.

He who can modify his tactics in relation to his opponent and thereby succeed in winning, may be called a heaven-born captain.

Hierarchy
These concepts can be defined as a hierarchy:
· Strategy
· Operational objective
· Tactic
· Task

Military usage , Military tactics
The terms tactic and strategy are often confused: tactics are the actual means used to gain an objective, while strategy is the overall campaign plan, which may involve complex operational patterns, activity, and decision-making that lead to tactical execution. The ,United States Department of Defense, Dictionary of Military Terms defines the tactical level as

…The level of war at which battles and engagements are planned and executed to accomplish military objectives assigned to tactical units or task forces. Activities at this level focus on the ordered arrangement and maneuver of combat elements in relation to each other and to the enemy to achieve combat objectives…

If, for example, the overall goal is to win a war against another country, one strategy might be to undermine the other nation’s ability to wage war by preemptively annihilating their military forces. The tactics involved might describe specific actions taken in specific locations, like surprise attacks on military facilities, missile attacks on offensive weapon stockpiles, and the specific techniques involved in accomplishing such objectives.